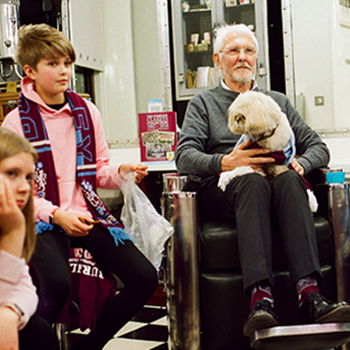 Back in December legendary football photographer, Stuart Roy Clarke arrived at the Bosun’s Barbers to photograph Tony and his family support the Clarets in their 1-0 victory against Sheffield United.

Tony, a Burnley Football Club fan & season ticket holder thought the opportunity to participate in the photoshoot was a prank at first. However, once he was convinced it was real, he suggested that Stuart join the family in the barber’s chairs – the ideal location to watch the game straight after work.

You can see Tony and members of his family in the images as part of a new outdoor exhibition, dubbed The Homes of Football, at the National Football Museum in Manchester

The exhibition showcases Clarke as he turns his famous camera lens inside the homes (and barbershops)of football fans across the country as they have supported their teams from afar.

The photography series captures the authentic imagery of supporters from every Premier League club, across Amazon Prime Video’s 30 fixtures in the 2020/21 season.

The full line-up can be seen as a free outdoor public exhibition outside of the National Football Museum, Manchester from Thursday 27 May. The exhibition brings to life the happiness, heartbreak and jubilation of football support across the 2020/21 season with visitors able to scan QR codes to hear the stories behind each image as told by the families themselves.

Legendary football photographer, Stuary Roy Clarke, talks about his latest project: The Homes of Football 2020/21 with Amazon Prime Video. The exhibition captures the emotions of fans in lockdown who have swapped the terrace for the television during an unprecedented year.