We’ve gone back to our roots and opened a traditional barbershop located on the upper deck of Antony and Patricia. It reflects the history of our Director Tony Winder when in 1967 he went to sea as a cruise ship’s barber initially on the SS Southern Cross then SS Oriana when he circumnavigated the globe several times.

Tony sailed through the Panama Canal, got to be in Tonga on Independence Day, visited New Zealand, Australia, South Africa and all over the South Pacific & the Caribbean. Following on from this amazing experience he was ship’s barber on aircraft carrier HMS Eagle and HMS Raleigh and also spent two seasons as a camp barber at Butlins in Filey and Minehead. 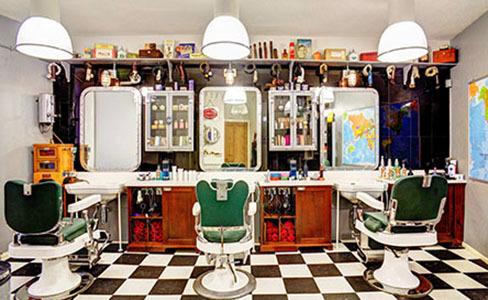 The barbershop opening also marks 47 in business. Since completing his training in 1962, Tony has been collecting barbershop memorabilia and his artefacts are finally on display inside Bosuns.

Come aboard and experience the nautical theme authentic ship’s windows converted into mirrors and lighting fixtures also originate from a ship. Relax into authentic barber chairs that are nearly 80 years old, which have been renovated and stripped down to the last nut and bolt. Outside the salon and barbershop, we have installed a renovated rare 1966 Dexter’s barber’s pole.

When we opened A&P in 1969 the barbershop and ladies hairdressers were separate, then in the late 70s unisex was the vogue and men and women would have their haircut, permed and highlighted sitting side by side. Returning to 2016, the beard and barbershop have seen a revival we’re pleased that the salon is going back to its roots and separating the two.

Carly Nicholas is an experienced barber who recently joined the team to oversee the barbershop and as expected she is excited to be barbering in such a unique salon. She brings with her over 11 years of ladies and gentlemen’s hairdressing skills, the latter four years working solely as a barber.